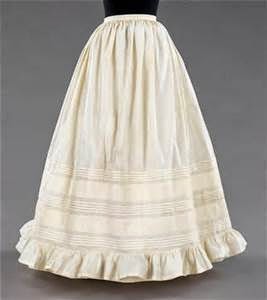 In the old days, southern young ladies were always well dressed, even to their “foundational” garments. There were chemises, corsets, bloomers, petticoats and crinolines and all served a purpose. A lady’s “delicates” were sacred; they were always to be worn and never to be displayed. Etiquette demanded that discretion be exercised even in the laundering process; a lady did not leave her under-things flapping in the breeze for all to see.
Today’s young women are liberated from such things, but maybe it’s not been to their benefit. It used to be common propriety for ladies to ensure they had a “smooth line,” and a young woman’s unmentionables lived up to their name – they did their job silently and discreetly. But times have changed. Young women today cannot feel the same sense of decorum; they have been raised in an era where there is nothing “unmentionable,” an age of TMI (too much information), a culture where talk-shows divulge what should be private, where perfect strangers converse about intimate topics and where what Elisabeth Elliot calls “the inner sanctum” has been violated and desecrated.
Walking into today’s shopping malls would give our grandmothers a coronary. Not only would they be shocked at the minuscule offerings in the lingerie department, they’d be speechless to see them inviting the gaze of anyone who passed by.
It’s true that our grandmothers’ lingerie served a different function than much of what is available today. Theirs was made for function rather than revelation. And there’s nothing wrong with wearing lace and satin instead of muslin.
But, womanhood lost something when undergarments became a contest of daring shapes plastered on posters and hung shockingly in display windows. What was once a feminine secret is now old news; delicacy has been traded for brazenness. But the southern girl who’s in the know still guards her petticoat; after all, there are some things better left unmentioned. And there is beauty in the mystery.