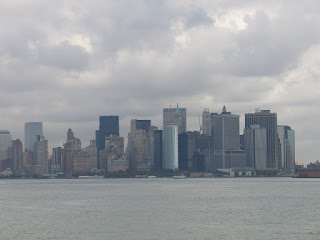 The NYC skyline — I loved it. 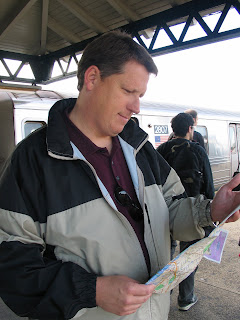 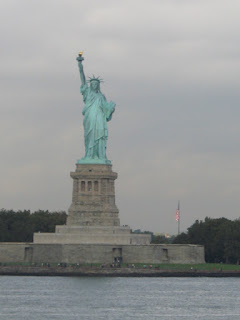 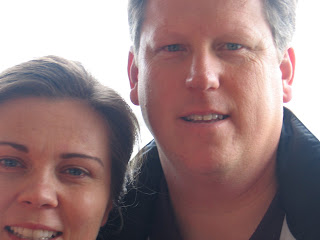 A rather cropped portrait of the touring couple! 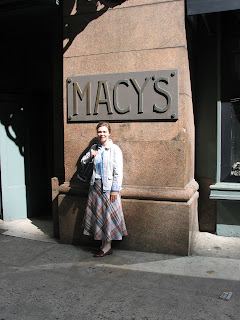 A week ago, my husband and I spent one incredible day in New York City. The generosity of a flight attendant friend allowed us to get complimentary flights into LaGuardia Airport. What a sight NYC is from the sky — there below us in the early morning haze was Lady Liberty and the massive Manhattan skyline. Awesome scenery to go with your morning coffee.

NYC is a maze — we needed help in getting our Metro passes. The lady in the Ground Transportation booth was very kind and, I think, a bit bemused by our very obvious tourist eagerness.

The Metro subway (or train, as they call them in NYC) is an experience not to be compared with others. Even when the car seemed to be full to the automatic doors, they would push right in, coming around whoever was there until they had to stop because there were so many bodies it was impossible to get in further. I started counting, and there were probably 125 people just in our ONE subway car. I was standing practically pushed up against a young woman who was sleeping in a subway seat — it felt more like I was “hovering” over her. Around me were businessmen with attache cases, a young woman in a business suit sipping coffee from a Styrofoam cup, a young man of Hispanic descent reading a Spanish newspaper, a young Asian man who appeared to be listening to an ipod — people, people, coming, going, getting in, getting out — and it seemed everyone had either a newspaper in their hands or earphones in their ears.

We took the Staten Island Ferry across and back — it offers spectacular views of the Statue of Liberty and the Manhattan skyline. We shared our iconic, windy ride with a cross-section of people — tourists, those who who were on their way to work, and a load of chattering elementary children on a field trip — identifiable by their name tags, teachers pointing out important facts, and of course, moms in tow.

After the ferry ride, we again took the subway to Penn Station, where we emerged into the sunlight and headed for Times Square. We spent the balance of our day in this general area. We walked down Fifth Avenue, shopped inside Macy’s, saw Rockefeller Center (they were painting the sculpture and had the fountains turned off!), gaped inside the gigantic Cathedral of Saint Patrick (there were so many candles burning!), looked around the inside of the famous Waldorf-Astoria hotel, strolled through a bit of Central Park, took pictures in Times Square, and soaked up a lot of NYC culture as we walked.

We had a nice steak and salad for lunch, and a dinner of pizza on the patio of an Italian restaurant, where we sat outside watching the passersby, ducking whenever we saw a pigeon overhead, and feeling like we were having supper in the lap of NYC. But the quintessential moment was when we stopped at a bakery whose glass-paned front was filled with bagels, croissants, and pastries. Inside, we ordered (what else?) New York style cheesecake and coffee, and shared it at a little bistro table. (sigh)

On the flight home, we were tired, overwhelmed, feet a bit pained, and our minds bursting with the images, sounds, and “feel” of the “city that never sleeps.” It was a day to cherish, to savor. I’ll not forget it. It will be a rich memory.