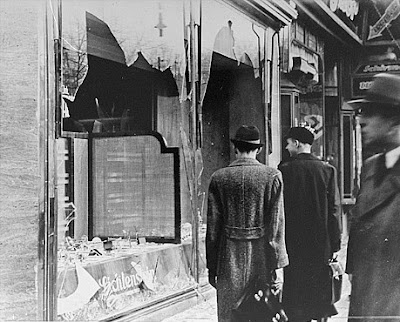 It happened tonight.
79 years ago.
Kristallnacht.
Night of Broken Glass
Here’s an excerpt from my newest book:
‘Where are you going?” An SA man grabbed his shoulder and stared into his face. “You need to stay here and witness the indignation of the German people against the Jewish pigs.”
Eryk stood ramrod straight and glared up at the man. “Sir, I have been injured tonight in the activities, and I cannot do anything. See?” He held up his arms, which were beginning to seep blood through the fabric.
The man glanced down. “So, I see. Injured yourself on the glass, did you? Well, I wish all our youth were as passionate as you for the cause.” He patted Eryk on the back.  “Go home. There will be another day for you to fight.”
Eryk didn’t need any more encouragement. As he turned and walked away, he saw the group of men and boys moving on further down the street, carrying their torches and insults to other victims.
Near the smoldering rubbish that once was his place of glory the old rabbi lay broken, moaning as he writhed in his own blood. The woman no longer moved at all. Her head was bashed in on one side, its contents spilling onto the street.
Eryk looked for a moment and then broke into a run. Down the streets of Berlin he raced, ignoring the fires and broken glass and screams and chants. He didn’t stop until he reached the gate of his own house. And it was only then, as he stood in a puddle of moonlight that he saw his arms were wrapped in the soft folds of a synagogue tapestry, its fringes soaked with his blood.