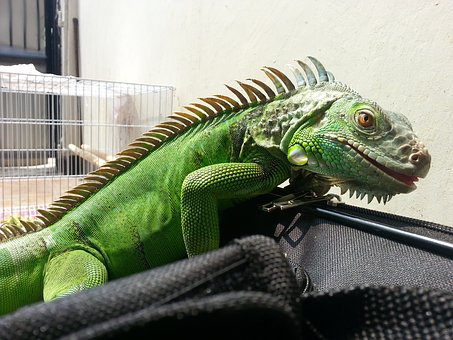 Macbeth was gone. Someone must have forgotten to latch the lid.

Katrin was taking a dog-eared library card from a 1st grader when her peripheral vision caught a glimpse of the empty case. Her first thought was to bolt from her chair, but she squashed the urge and smiled instead.
Across the counter was an eager little girl, missing front teeth and proudly holding a stack of books. Mom stood behind her, busy with baby brother, shuffling two loaded bags, not suspecting that a reptile was on the loose. Katrin didn’t have the heart to tell her; motherhood had enough stress.
She scanned the books quickly, more quickly than usual. It wasn’t like her to want to get rid of her patrons. She usually enjoyed every bit of her job, even handling sticky CD cases and re-shelving piles of picture books. But right now, a monster was on the prowl, and he could be anywhere.
“Thank you, Crissy. Be sure to tell me how you like the book about elephants.” Katrin wobbled out a smile.
“Thank you, Miss Johnson. I will.”
As soon as they disappeared down the hall, Katrin sprang from her desk. She took a few deep breaths and started to search.
Behind the librarian’s desk – no Macbeth. On the reserved items shelf – nothing. She slowly inched out the shelving cart. . . .wait! Was that a long shadow? No.
Mustering her courage, she checked the children’s bathrooms and looked behind potted plants. Where was that lizard?
Technically he was an iguana, a native of the tropics, and for the past week, he had taken up residence in the children’s department – part of the Cultures of South America display.
Katrin hadn’t been a fan of the decision, but it was the new library director’s idea to have something living in the rotating display. Katrin wondered grimly if they’d be able to find polar bears when they featured the Arctic.
Angry and muttering, she almost missed the slight movement behind the trash can. Sure enough, there he was. Katrin stumbled backward, banging her shin on a table, eyes never leaving her beady-eyed enemy. “Ouch! That hurts, you abominable reptile.”
Reaching down to rub her knee, she contemplated her next move. At any moment, school children would swarm the department. There was no one else to do it. She closed her eyes briefly, swallowed and lunged.
Empty air greeted her hands as the reptile skittered away and down the hallway. Wanting to scream, she tore after it. The Middleton library was small, with the adult department upstairs. Surely, he wouldn’t . . . he did. Up the stairs he raced with Katrin fast behind him.
Reaching the top, panting, she looked around wildly and saw him dart under a lamp table in one of the reading nooks.
Without thinking of her whereabouts, she whipped around the corner in pursuit. But her heel caught in the rug and she tripped, landing with a soft thud beside an overstuffed chair. Ouch again.
A masculine voice broke into her humiliation. “Did you lose something?”
He was dressed in chinos and a blazer. And even in the craziness of the moment, her mind registered a British accent and dark curly hair.
“Sort-of.” She was mortified. “Just chasing part of the South American display.”
He laughed softly, not annoyingly, but rather nicely, in a fun-loving sort of way. “Well, maybe I can help. The book was getting monotonous anyway. Are you hurt?”
The hand he offered had tanned, strong fingers. She took it and got to her feet as gracefully as possible, smoothing her skirt.
“No, I’m fine. Thank you.” Katrin mumbled.
“You’re welcome. And here we go, Cinderella’s lost slipper.” He picked up her navy pump that had gone flying and handed it to her. “Now, how can I help?”
Katrin looked around. That wretched reptile was still there, staring at her. She wanted to stick out her tongue at it, but instead, she pointed.
“How good are you at catching lizards? That’s Macbeth. He escaped from the children’s department.”
“Ah, so he’s the one to blame. Do you have to chase him often?”
“No, this is the first time. As a matter of fact, I don’t know why he’s in there in the first place. It was our new library director’s idea.”
“He sounds like an adventurous sort.”
“I suppose he must be. I was gone last week when he arrived so I haven’t even met him yet.”
He turned to her, grinning. “Well there’s no time like the present.”
It took her a moment. “You mean you’re . . . .”
“Kent Wilkins, Middleton Library Director.”
“Oh! How embarrassing.”
“Not at all, Miss Johnson. It’s not often that I get to rescue a beautiful woman in the library. I rather enjoyed it.” His eyes twinkled.
“You’re very kind to take it this way, Mr. Wilkins. I really meant no offense. It’s just that I don’t do very well with reptiles, if you know what I mean.”
“It’s quite all right, really. I promise not to be offended that you don’t like Macbeth as long as you don’t lump me in the same category.” And he smiled. Wow, he smiled!
“That sounds fair. I promise to make an unbiased decision. But first . . . can we put Macbeth back?”
“Absolutely.” He bent down to pick up the iguana. “Come here, you rascal. Tell the lady you’re sorry for scaring her.”
Katrin backed away slightly. “That’s okay. I’ll take your word for it.”
“Excellent. And now, if you’ll accompany me downstairs, we’ll get our little friend back where he belongs. And then, how about a cup of coffee after closing?”
“But, I thought . . . .”
“That Britishers drink tea? We do when we’re being routine and cultured. But tonight, the adrenaline rush I’ve had calls for coffee.”
“So Macbeth startled you too?”
“No, I’m afraid not.” He winked at her, impishly. “You see, I opened the case.”