the God of broken paradoxes 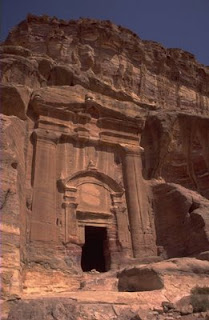 It is resurrection day! Glorious light; tremendous hope; eternal promise of new life. God fulfilled the prophecy that death would be conquered through His Son, Jesus Christ.

A group of women had come to offer one last loving service to the Master–wrapping His body with fragrant spices, the final sacrifice to the One they worshipped.

Imagine their wonder and amazement. See them stare in awe at the angel who speaks. He gives them a commission–go tell the others. No problem! They are out of there.

Now, remember this is ancient Israel. Women held a less important place than men in that culture. They were not allowed all the way into the temple, but had to remain in the women’s court. They were not educated; they were not regarded as being equal in value. How like God to turn the tables and do the unexpected. There could be no greater affirmation of love for His daughters than to give them the privilege of hearing the good news first.

Enter the disciples–the practical fishermen and business men who followed Jesus. They are huddled in an attic room, hiding from the law. It was depression like never before. The men are probably drinking coffee, some engaged in hushed discussion; others staring silently off into space. The women burst into the meeting room, animated, talking so fast their words are not distinguishable.

You guessed it. The men rolled their eyes and looked at them with tolerance. Women’s gossip. How could you ladies be so gullible? The Romans probably took Him somewhere else! You’re mistaken. That’s ridiculous.

It was Mary Magdalene, Joanna, Mary the mother of James, and several other women who told the apostles what had happened. But the story sounded like nonsense to the men, so they didn’t believe it. (Luke 11:23-24, NLT)

Oh, God chooses to work in ways which amaze those who are wise. He moves despite the culture. He shines brightest in the impossible. He brings Easter hope to anyone who believes. It’s the kind of faith that stares at the empty tomb and glimpses the power of resurrection. It’s the belief that God does His greatest work in the dawn of despair. He is the God of broken paradoxes, the Christ of slashed incongruities, the Savior Who triumphs the implausible.