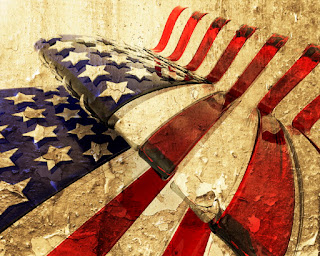 As a conservative, I hold firmly to my convictions and as a Unites States citizen, this affects how I vote. I have very decided opinions about my country and how I feel it should be governed. If you’re an American, I hope you do as well. For patriots to be without strong conviction is frightening; our nation cannot exist if her people are casual or worse, apathetic.
My patriotism is strengthened and balanced by my status as a follower of Christ. When Jesus walked on earth, His contemporaries were patriots too. They were Jews who loathed their Roman rulers. Who could blame them, these people who have been violated and oppressed down through history? I’m convinced that Christ was not in favor of Roman cruelty; God created humanity with inherent freedom – His freedom, the gift of personal choice. Yet, Jesus did not advocate slander and violance.  He promoted truth.
Those who believe strongly and see the dangers ahead many times become frantic in their attempts to persuade others of the threat. You could liken it to a signalman trying to stop a car racing toward a train crossing. And unfortunately, it seems that emotion and momentum must reach a fevered pitch before the base gets motivated to act. Oh, that we were inspired to be good citizens even when the stakes were not as high!
Still, it remains that anger and fear are great motivators. And in this election cycle we have seen them both up close. I have felt them both; you probably have as well.
But, let’s make an effort to vote righteously, fearlessly and freely but not angrily. I must temper my emotions when the outcome is announced – whichever way it goes. I must stand for truth and right without rancor. I must adopt the mindset of other patriots of other times who fought hard and retained dignity while doing it.
It’s easy for conservatives to be angry – angry in church, angry in the public square, angry in the voting booth, angry everywhere at the audacity of those on the other side. And often it is difficult to distinguish between righteous indignation over the rampant evil in our culture and what we Southerners call having an “ugly attitude” toward others. It takes the grace of God to be a conservative citizen who can have strong feeling and Christlikeness at work all the while. There is no room for backing down or neglecting truth or having a spine like a jellyfish as my grandfather termed it. It’s strength under control; it’s Christian patriotism. And after all, that’s what our nation was founded on.
So, today as I cast my vote, Lord, help me to proudly and firmly do my duty, let me use all my persuasive powers and winsomeness in talking to others who are genuinely seeking answers, give me the conviction to follow through on my conscience and let me do this with Your grace and strength and love. In Jesus’ name, Amen.