A Tin Cup and a Truce 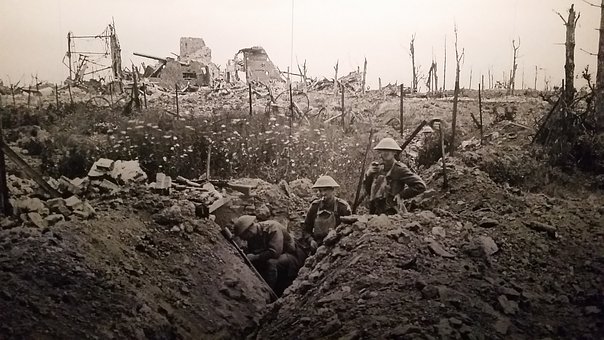 Her picture was ragged around the edges. Brittle from the freezing temperatures. Fading from being carried in his pocket. But it still warmed him to look at her.

Rose. A summer flower. A fragrant, beautiful flower. In his mind, he was walking with her through the meadows in June behind the farmhouse on his father’s land. He was holding her slender hand, looking into deep blue eyes and whispering how much he loved her. He was leaning down to pick a wildflower bouquet just to watch her smile and running with her through the sweet-smelling grasses.

A slap on his shoulder brought him back.

And he jumped up, turning around to man his section of the trench. He was back. Back to frostbite. Back to stinking, sodden clothing and trench-foot. Back to mud and gunfire. Back to the fear of poisonous gas and the ever-present rats. He was back. His reverie with Rose was gone. A daydream. A misty moment.

When the gun battle was over, he slumped back into the trench, mentally spent and bone weary. He put his hand back into his inner pocket to pull out his treasure.
And it was gone.

Frenzied with fear of losing his last link to his beloved, William dug furiously through his knapsack, felt the ground around him, squinted in the dim light to see if it had gotten stomped into the mud. He couldn’t see it. A sick feeling washed over him. The picture of his Rose must have fallen unnoticed in his dash to man the trench and gotten trampled and shredded underfoot.

Soldiers weren’t supposed to cry, but his cheeks felt wet as he laid his head back against the rough boards shoring up the trench and tried to catch a little sleep. They called it “No Man’s Land,” this forsaken stretch of land that lay beyond them and he truly felt it was. If ever troops of men struggled in a conflict that seemed futile and hopeless, it was this one. Waiting for the Kaiser to do something, wondering if the Yanks were going to join up, waging war day after day in endless rounds of gunfire and shelling – the tedium of it was wearing on a man. And with the loss of his link to Rose, William Collins was near to breaking.

Will slowly turned his head to his left. A soldier with long legs and a smile was holding something out toward him. A piece of paper.
It was Rose.
Crumpled and stained, but so beautiful.

His hand trembled as he reached out for it. “Thank you. You can’t imagine how much this means, mate.”

The lanky “Tommy” nodded. “I think I do. And you’re welcome.” He held out a steaming mug. “Have some tea?”

Will took the tin cup. The warmth fairly scalded his fingers, but he didn’t care. “Ahh, how did you come by this?”

Again, the smile. “I can’t part with all my secrets.”

Will drank gratefully. “Thank you again.”

The man watched him for a moment, then said, “I’m George. And you’re welcome again.” Then he pulled out a book and started to read in the last few rays of light.

Will savored every drop of tea. It was a bit weak and there was no cream, but to him, it was the nectar of heaven. And it started to take away the chill that never seemed to let go. He turned to his new friend who was squinting over the pages of his tiny book. “Reading the Bible?”

“I’m not needing that one. I have one issued to me. Just don’t read it much.”

The tall man didn’t say anything. Just sat with him in easy silence.

But Will was feeling talkative. “Why do you think we’re fighting this war, if there’s a God in heaven?”

George looked into the distance for a few minutes before answering. “I think it’s because we’ve rejected God’s way of doing things. As people and as nations. This war is about greed. That’s not God’s way.”

“That sounds about right, mate. I hear tell that the Germans will just as soon take your boots right off your warm body after you go down.”

“Really? I heard that about both sides. After all, feet get cold in every country.” A smile tugged at the corners of the man’s mouth.

Will wasn’t sure how to take that. “Guess that’s right. You think that Fritz is like us?”

“I am certain of it. They’re born into a different country and see the war from a different trench, so to speak.”

“But what of their Kaiser? There’s a greedy man. I’d not want to fight in the army of such a man.”

“True. He is no gentleman. Germany would be better rid of him.”

“Then what does your Bible say is the answer for us on this day before Christmas with chaps dying all around us and nothing but more killing tomorrow?”

“It says, ‘Honour all men. Love the brotherhood. Fear God. Honour the king.’”

“And how can we do that out here, my good man?”

George pointed to the sky. “He’ll show the way. We must be willing.”

Will fell silent. Overhead, snowflakes were peppering down. He pulled his wool blanket closer around him and huddled back as far as he could into the embankment of the trench. Soothed by the tea, he dozed off.

A sound woke him.
He jumped. The snow had stopped. The stars were brilliant in a clear sky. George was nowhere to be seen.

The sound came again. Faint, like a moan or a whine. No, there it was again. It was music. It was singing.

Will jumped up to listen, knocking his rifle over as he did. The Germans were singing.

He thought of Rose. She’d be sitting in the Christmas Eve service about now, listening to the minister ring out the story of the Christ-child’s birth. There’d be tea and crumpets afterward before the long tromp through the frosted streets to her parents’ house with the fat Christmas tree trimmed with sparkles and ribbon beside a roaring fire. How he wished he were there with her.

The men around him had joined in the singing.

How could he sing about peace and quiet, with this miserable war all around? How could a chap be expected to extend goodwill when the men on the other side would have been glad to see him cop it just a few hours before?

He folded his arms. And was silent as the singing continued.

The sergeant nudged a body with his boot. “Who is this bloke?”

Will stared. And even in the dim lamplight, he could tell it was George, his long legs sprawled unnaturally, his jacket heavy with blood.

“Found Fritz there lying on the edge of our trench. Must have been up to no good. Been dead a couple hours.”

“Tags are in German. Guess that means he is. Rather a shame he had to get copped just before the singing started.” The officer shrugged and walked away.

Will nodded. “Yes.” He looked at the still, muddied face. It was incredible. A German? Then he noticed that one of George’s hands was clenched around something. Something he recognized. Will pried it out of the stiffening fingers and held it upward, a peace offering, a sacred acknowledgement. Then he put the tin cup in his pocket next to Rose and started to sing.

The Christmas Truce of 1914, a series of widespread but unofficial ceasefires along the Western Front of World War I, really did take place. Diaries and letters of those who served record that the enlisted men and officers exchanged gifts, played sports and enjoyed camaraderie and festivity. It began with the raising of some tiny Christmas trees and the singing of Silent Night in the dark, early morning hours. Who knows how many men were changed by it? I imagined this particular story but something like it could have happened. May it remind all of us to love those around us wherever we find ourselves this Christmas.

My great-uncle Willie (William) Walker died in France of the influenza during World War 1. The rigors and agonies of what they called The Great War have been largely eclipsed by the even greater conflict that took place just a few years later. But the misery of those who fought in the trenches was very real. This story honors all those doughboys, the ones who came home and the ones who did not.