A Little Piece of Rock 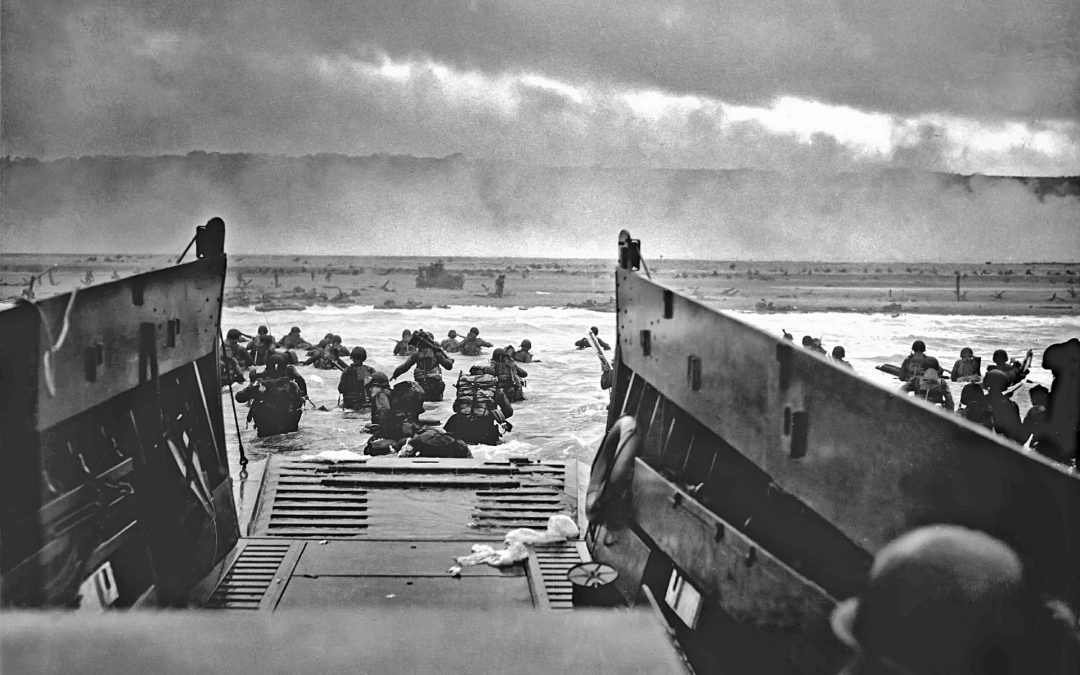 Joe fixed his eyes on it as he crawled. A rock jutting up on the beach, a few hundred yards from him. All he had to do was reach it.

The men of the 1st Infantry Division, Company B, were floundering toward dry land, kicking, thrashing, coughing, dragging each other to shore. Those who were alive were. The other members of Company B were bobbing in the water, floating face-up, face-down, dismembered, water-logged, bloody and wearing vacant expressions. The ratio of alive to dead wasn’t good. In his disoriented state, this still registered. There were more floating in the water than snaking along the sand. Omaha Beach was the scene of a massacre.

But the rock was still there. And surprisingly there was still life in his limbs. He kept moving, eating sand, eyes burning, muscles screaming, mouth dry and nerves taut.

Thwack. Bullets penetrating the sand.
Scream. The soldier on his left lost his hand.
Moan. The man in front of him crumpled.
Roar. The flamethrower was a monster.
“Mama.” There was no shame today. They were boys, trying, fighting, losing, reaching out for comfort in their last moments.

Joe wanted to help the kid writhing in red-blood sand to his left. But he had no medicine or bandages and they were exposed to enemy fire. Every second was one bullet from death.

Joe put out his hand and squeezed the kid’s shoulder. But with his next breath, blood spewed out from the cavity in his abdomen. It was a veritable gush, a crimson tidal wave. He gripped the boy’s hand. “‘The Lord is my Shepherd, I shall not want. . . ‘”

The kid picked up the words, his wild eyes locked on Joe’s and his voice growing weaker until it was finally cut off by gurgles. His eyes fixed, his head lolled. And there was no one to clean him up and give him the final dignity of a calm moment. Joe pried his fingers loose and kept crawling.

The piece of rock was closer now. His leg muscles were on fire. His lungs felt heavy. He had trouble breathing. He dug his nails into the sand and kept crawling.

Ahead, he thought he saw Germans. And for a moment he considered jumping up and taking a shot. But he didn’t. He kept crawling.

It happened so suddenly he didn’t even have a warning. That’s usually the way it is. And the white-hot second that startled him didn’t last. He only knew he was dying because the beach began to fade away and the noise became silence.

They say there are no atheists in foxholes. It is certain there are no rebels squirming on battlefields. Joe did what only God knows how many others have done. He reached out with his gasping breath to the One who walked the beaches of Normandy on June 6, 1944.

The mass of pillaged bodies awash in pink waves were not without a Presence. No one died alone that day. And He ran to any who would turn to Him at the very edge of eternity.

Joe didn’t make it to the piece of rock. In fact, there wasn’t a rock at all. After all, why can’t a God who isn’t willing that any should perish cause a helmet to look like a rock so that one more soldier might have time to pray?

The Allies took the victory that day. Against evil. And we remember it. We honor those men, those boys, those Americans, whose courageous spirits hallowed a common piece of shoreline.
D-day.
June 6, 1944.