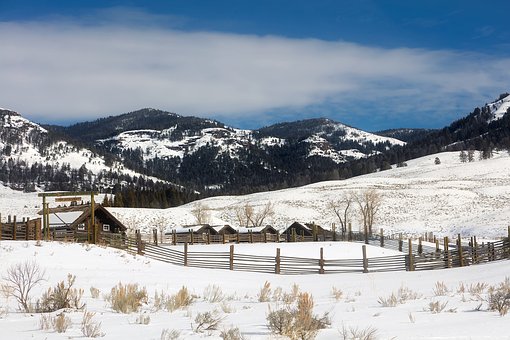 Westen Black shook his head in disbelief.
That hardheaded stallion had gotten out of his stall again. How in the world?

He walked over to where the stall door was swinging crazily by one hinge, leaned his arms on the good part of the enclosure and swung his boot at a clod of hay. It meant a miserable day for him, chasing that crazy horse over the countryside. And today would have to be one of the coldest days yet this December. He’d come back wet and dirty and sick probably. But there was no use procrastinating. He might as well get to it.

It took a few minutes to go inside and pull on some warmer clothing, grab his parka and gloves and a scarf for his neck. The house smelled so good today. His mom was baking. Again. This time peanut butter cookies with Hershey kisses nestled inside were cooling on the sideboard. He snagged a couple of them as he walked by. And didn’t get away with it, of course. Never in his life had he been able to swipe food without his mom knowing it. She gave him a playfully mad look and swatted in his direction with the spatula she was using for the cookies.

“I will. There’s gobs of them here.” He inched his hand toward another.

She tapped it with the spatula. “But they’re for the Christmas Open House tonight at the church. I have to help with refreshments. You can get more then.”

“If I’m even there.” He rolled his eyes.

“Why wouldn’t you be there? Dad said you all were done mending the fences and thought you and Walton could go.”

“Salva got out again.” It was short for Salvaje, “wild” in Spanish.

“What? I thought you had made sure that wouldn’t happen again!”

“I tried. But he figured it out. I’m almost ready to get rid of him. No telling how long it will take me to find him today, with the snow and all.”

“I’m sorry, son. Did you wrap up good?” She slid another baking sheet in the oven and then came over to give him a hug.

“Yep. I’ll be all right.” He zipped up his parka and grabbed his Stetson. “Do you have any coffee I can take with me?”

“Right here.” His mom filled his insulated thermos and handed it to him. “Be careful, son. Try to get back in time for the church event. You’ll be starved by then anyway.”

Westen grinned. “No, I won’t. I just might eat Salva if I find him.”

She pushed him out the door with a chuckle. “Nah, you like him, and you know it.”

The snow swirled around him as he walked to the barn. It took a few more minutes to saddle up Sienna, get the lariat he needed and put his thermos and a blanket in the saddle bag. He swung up finally and headed for the open country to the back of the ranch. There were still a few tracks. Salva had left a trail.

But it didn’t last long. A few hours later, Westen stood beside the ledge of a canyon, trying to see into the churning of the snow and wind. Where was that loco horse?

And then he heard it. A faint whinny. It was so hard to tell with the wind blowing but it seemed to come from his left. He backed away from the canyon drop-off and pointed Sienna in the other direction. She moved forward, unbothered by the weather. She’d seen more than this in her days of service at the Black ranch. There wasn’t a more surefooted mare in their herd. Nor one more longsuffering. Westen remembered a few times, in his adolescent days, when he and his twin had given the faithful horse a bit of grief with their schemes and tricks. But she was pretty decent. She’d put up with the young scalawag sons of the master.

He heard the whinny clearly now. He got out of the saddle and led his mount with the reins. And nearly bumped into a burly figure coming from the other direction. A figure also leading a horse.

“Are you looking for him?” The wind caught the words and flung them around, but he managed to catch them. The voice sounded female, even if the figure resembled a sumo wrestler.

“Yes, thank you.” Westen reached out for the rope. The person handed them to him and turned around.

“Wait! It’s getting bad out here. Can I give you a ride back to your place?”

He shook his head. Must be a newcomer to the area. “Suit yourself.” People who lived here for any length of time knew that you tried not to get caught alone in bad weather. And you accepted help from neighbors. Of course, maybe she wasn’t his neighbor. He couldn’t ever remember seeing her, though the way she had been bundled up, he couldn’t say for sure what she looked like.

He tied the lead rope onto his saddle horn and climbed back onto Sienna. Behind him, Salva snorted and tossed his head, clearly unhappy with the turn of events. “Sorry, old boy. Your footloose days just ended. You’ve run away from me for the last time.” Westen clucked to the mare and started for home.

The church fellowship hall was jam packed. Westen carried the platter of cookies to the dessert table and set it down with all the other sweets. His mom needn’t have worried. Every cook in town had contributed, it appeared. Behind him, Walton took a gallon of cider to the beverage station. There, they were done.

Walton caught his eye from across the room and winked at him. Who you gonna eat with? It was an unspoken, brotherly challenge. Engaged to the beauty of the local rodeo and already starting to build his own herd, Walton’s future looked secure and as happy as any cowboy could wish. Westen, on the other hand, was home from college graduation this past spring and still hadn’t found his bearings. Sometimes he felt a little like Salva, eager to get out and find his calling. Maybe that’s why the stallion irritated him so much. He was too much like him in spirit.

He’d heard that voice before. Westen looked up at the sumo wrestler. Except she didn’t look like one now. Not at all.

Her eyes twinkled at him and her smile was friendly. He liked it. “Hi. I was hoping you got home okay.” It was true. He didn’t tell her that he’d also thought she was an ignorant greenhorn.

“Why wouldn’t I? I know this place like the back of my hand.”

“Oh? I’m sorry. I didn’t realize you were from around here. My name’s Westen Black.” He offered his hand. He really did want her to take it.

Westen shook his head. “Wow, yeah, I remember a girl by that name, but you moved away, didn’t you?”

“To another state for a while. We came back this summer. I’ve been wanting to come over to see you, but I’ve been pretty busy helping my dad with the herd this fall. It’s just the two of us now that my mom passed last year.”

“I’m so sorry. I didn’t know.” He realized he was standing in the middle of the room, talking to a pretty girl and looking awkward. Walton, get lost.

Sage flipped a heavy blond braid over her shoulder and smiled. Yeah, that was worth whatever Walton said. Westen didn’t care if ever moved at that moment. He’d spend the evening right here, even without cookies.

“It’s all right.” She was saying. “God let us have her a good long time before the cancer took her, and she’s not in pain anymore. And besides, she would be so happy about tonight.”

Westen motioned toward the tables of food. “Why don’t we get something to eat and you can tell me about it?”

She nodded and turned to walk beside him, her pretty boots and denim skirt a sweet contrast to his jeans. “By the way, how did you manage to get a lead rope on Salva and walk him? He pranced and jerked all the way home after I took him from you.”

She picked up a styrofoam plate and napkin with holly berries on it and looked up at him with the twinkle back in her eye. “That’s what I was trying to tell you. My mom would have been so happy about tonight because her plan worked.”

“Huh?” Westen helped himself to beef barbecue and baked beans. “What does she have to do with that wild stallion of ours?”

“You probably don’t know it, but Salva used to be ours. My dad sold him to your dad before you came home from college. And he loves me about the best of anyone in these parts. My mom always used to say that if I could tame him, I’d have no trouble with any cowboy around. I guess she might be right.”

Westen looked at her over the crockpot of macaroni and cheese and winked. “Hmmm. Well, Miss Horse Tamer, I might have to see you in action before I decide. What are you doing tomorrow?”

“Yeah, it was the backup plan. We have two very sneaky mothers, I’m afraid.”

He’d been had. “You’re telling me. Did I even have a chance?”

And Sage tossed her braid again and smiled over her shoulder while she walked to one of the tables where his dad and mom were seated. And he followed. Just like Salva, he knew when to give in. And he wasn’t minding it one bit.